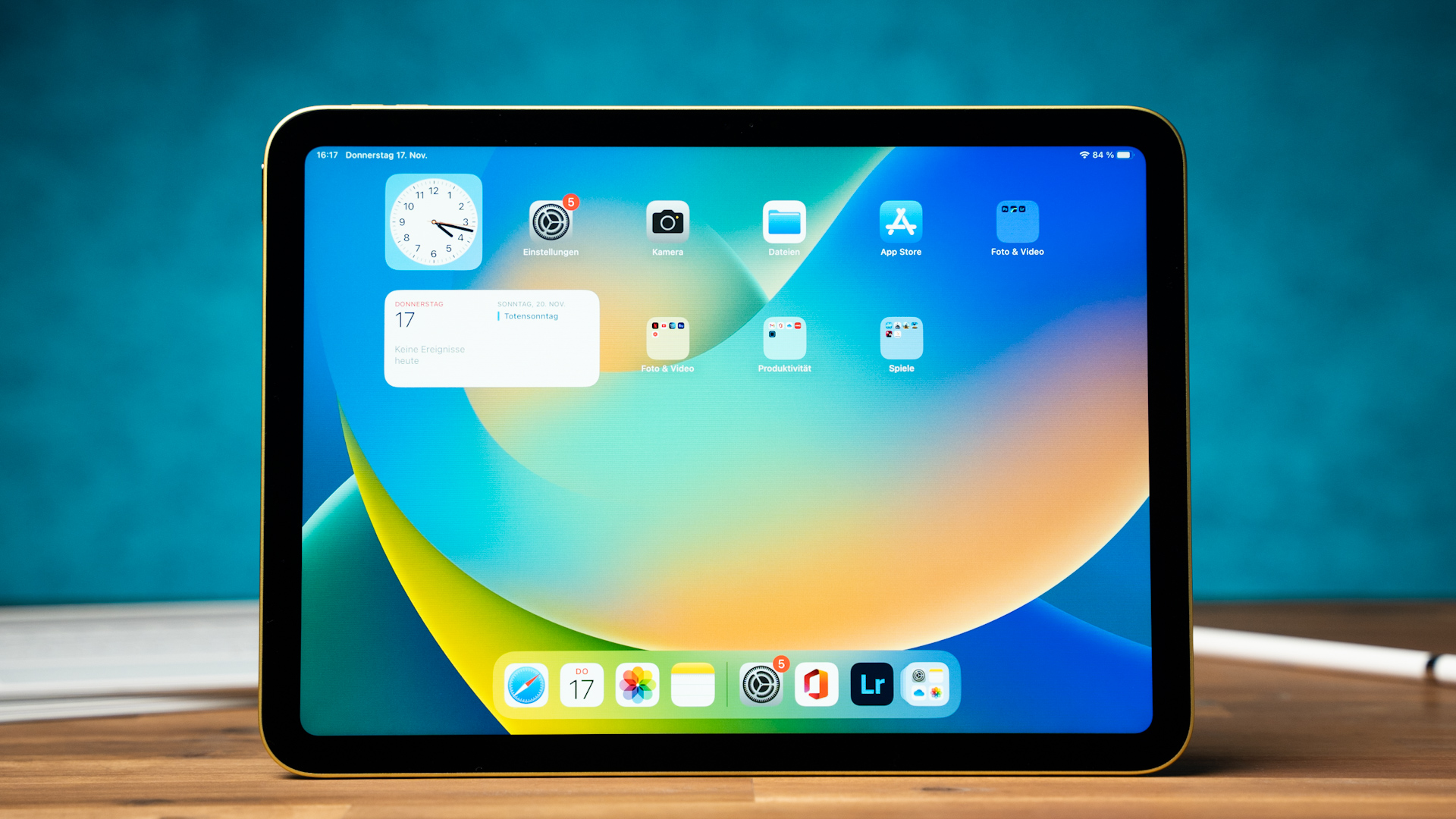 My test shows that the Apple iPad 10 is not as bad as everyone says. Regarding some aspects, the 449 Dollar tablet is better than more expensive competitors running Android. However, there are a few major weaknesses and I noticed one issue that nobody else seems to mention. In this iPad 10 review, you learn what I like about the iPad 10 and what this one unknown weakness is.

I think it’s great that Apple has finally discarded the old design with the home button, thick black bezzels, and Lightning connector. The simple iPad 10 has the same basic design as the iPad Air and iPad Pro now. A uniform black bezel surrounds the display, which is noticeably thinner than on the iPad 9.

Although the corners are rounded, the overall design has become a bit more rectangular. The case is still made of aluminum and has a high-quality feel. It’s 7mm thin and weighs 477g. I’ve gotten the yellow version, but you can also get it in blue, silver, and pink.

It’s a shame that Apple has removed the headphone jack. As usual, there is no space for a microSD card. However, I like the fact that the TouchID fingerprint sensor is now located in the power button, just like on the Air. And even better is that we get a USB C port instead of the old Lightning connector now. It’s slower than the iPad Pro and as fast as a USB 2.0 port, but you can still connect external monitors.

There are four speaker slots on the sides with two speakers. Sound quality is pretty good and I like that we finally get decent stereo separation on the basic iPad. That’s why it’s a great media tablet.

I also like that the 12-megapixel ultra-wide webcam sits in the center when using the iPad in landscape orientation now. On all other iPads, the front camera sits on one of the short sides, so you’re never positioned exactly in the middle when video chatting. The main camera on the back also resolves at 12 megapixels and the quality is very good on both.

The built-in hardware is fantastic. The Apple iPad 10 is equipped with an Apple A14 chipset, which is supported by 4GB of RAM. You can choose between 64GB and 256GB of internal storage. A version with 5G is also available. If you want to install a lot of demanding games, edit photos and videos, or perform other data-intensive tasks, 64GB is a bit low. I regretted getting the 64GB version of my iPad Mini because I’m constantly running out of space.

In the Geekbench 5 benchmark comparison, you can see that the iPad 10 is significantly more powerful than the Samsung Galaxy Tab S8 series. Thus, it’s snappier than the best Android tablet on the market. It’s slightly stronger than the iPad 9, but sits below the iPad Mini. The iPad Air with the M1 and iPad Pro with the M2 are clearly more powerful.

This is exactly what the 3D Mark Wild Life Extreme test shows. The graphics performance is better than any Android tablet, but it is clearly below the iPad Pro. So, the performance is excellent for this price range.

Apple’s processors are so powerful that developers can hardly fully utilize the performance on an iPad. So you can play games like PUBG Mobile, Asphalt 9 and Apex Legend with the highest graphics settings and all these games run very smoothly and look good. Even compared to the latest iPad Pro, it’s hard to see a difference.

This is exactly what my video render test shows. I rendered a 9-minute 4K video in Adobe Premiere Rush, and here the iPad 10 takes only slightly longer than the M2 iPad Pro. However, that’s also because no software is fully utilizing the M2 yet. It’s significantly more powerful than the Samsung Galaxy Tab S8. Again, that’s the fastest Android tablet on the market.

Let’s move on to the display, and this is where my praise of the iPad 10 ends. At 10.9 inches, the screen is now slightly larger than on the iPad 9, which I like. The resolution of 2360 x 1640 pixels is also good, as texts look nice and sharp. I especially like that it’s very bright at 500 nits. Very few competitors are brighter than that. Colors also look great and it supports Apple’s True Tone technology.

Let’s get to the criticism. I find it rather unfortunate that the display is not laminated. And that’s despite the fact that it costs 450 Dollars. An air gap is visible between the IPS panel and the touchscreen. This makes it look as if you don’t touch the screen directly, especially with the Apple Pencil. When you tap the screen with the Pencil, it also sounds a bit hollow – because that is what it is.

I think this is also a reason why the black levels are not as good as on the iPad Pro. Black looks more like a dark gray – even compared to the 11-inch iPad Pro, which also has an LCD. Especially in direct comparison, the iPad 10 is much more reflective than the Air or Pro, since a good antireflective coating is missing.

Read: The Best Apple iPads In A Comparison

I noticed another weak point that no one else seems to mention. When using the iPad 10 in landscape orientation and scrolling, a jelly effect or rolling shutter effect is visible. It looks like one half of the display responds a bit faster than the other.

Such an effect can be seen on some 60Hz tablets. These include the iPad Mini and the Samsung Galaxy Tab S5e. I don’t think it’s as bad on the iPad 10 as I do on the Mini, but it is noticeable.

Similar to the display, I’ve got praise and criticism regarding the Apple Pencil. It has some good features, but also some negative ones. Although we get the same design as the Air and Pro now, the iPad 10 works with the first-generation Apple Pencil only. But not with the Apple Pencil 2.

The Pencil 1 charges and connects to the tablet via a Lightning port. The iPad 10, however, has a USB C port. Apple’s solution is an adapter that you must buy separately. Without this adapter, you cannot connect the stylus to the tablet. Also, you can no longer charge the stylus directly on the tablet, but need at least an adapter and a USB C to USB C cable.

Read: The Best Tablets With An Active Stylus Tested

Other than that, the stylus works the same as before. And I think it’s a really good stylus that is better than many Android tablets. You can draw well with it and write down handwritten notes. Of course, the non-laminated display is a bit distracting, but most people won’t notice it in real life.

The iPad 10 runs iPadOS 16, which is the same software that also runs on the iPad 9 and 8, as well as the Pro and Air models. Therefore, I don’t have too much to say about it. In general, I think it’s great that there are many more apps for iPadOS that are optimized for tablets. The selection is huge, especially if you want to work with a tablet or need it for school or university.

I also like the fact that iPadOS can be used with a mouse and keyboard now. Safari displays web apps just as well as the desktop version. And you can connect almost every accessory like hard drives, microphones, monitors and complex USB C hubs via the USB C port. The only unfortunate thing about the software is that the simple iPad doesn’t support the new Stage Manager.

Although the iPad 10 looks like an iPad Air or Pro now, it does not work with the Magic Keyboard. Really unfortunate. Instead, Apple has released a new keyboard case for the simple tablet, called the Apple Magic Keyboard Folio. It costs a hefty 249 Dollars and currently works with the iPad 10 only.

We already know the basic design of the Magic Keyboard Folio from many Lenovo and Samsung tablets. It’s made up of a back that connects magnetically to the tablet and has a folding stand built into it. The folding stand can also be used without the keyboard – that is convenient when you need a stand to watch a movie, for example.

Read: These Are The Best iPad Alternatives

The keyboard is then also connected magnetically. The display and the back are protected when folded. It’s a pity that unlike Microsoft, you cannot angle the keyboard, but it always lies flat on the table.

In general, however, it’s a very good keyboard, with which I enjoyed writing. Like this review. Similar to the Magic Keyboard, the keys have a good travel and for a 10 inch tablet, the keyboard is quite large. New for Apple is a bar with function keys at the top. A backlight is missing.

The touchpad works great. It’s relatively large for a 10-inch tablet, but quite small compared to a laptop.

In my battery test, the iPad 10 got a runtime of 5.5 hours. For this test, I always loop an HD YouTube video at maximum brightness. Considering that the display is very bright, this is a solid result, but not a great one.

So, is the Apple iPad 10 a good tablet or has Apple made too many mistakes? The processing power is really good at this price and I like the high-quality build, the bright display, the speakers, and I like the new keyboard as well.

On the other hand, it is unfortunate that the display is not laminated and this jelly effect is not nice either. And the USB C adapter for the Apple Pencil is ridiculous.

Apple did not accidentally make the iPad 10 less than perfect, of course. They were quite careful to make sure it’s better than the iPad 9, which is cheaper and still being sold. At the same time, they’ve been careful not to make the iPad 10 as good as the iPad Air. It positions itself right in the middle.

And in such a way that you’re inclined to buy the iPad 10 if you’re considering going for the iPad 9. But if you’re willing to spend over 400 Dollars from the start, the iPad 10 has enough weaknesses that you’ll seriously consider spending even more money on an Air.

Let’s look at the alternatives.

The most exciting alternative is the Apple iPad Air. While it looks very similar to the iPad 10, it’s significantly better in almost every aspect. The iPad Air has a fully laminated display and it supports the Apple Pencil 2, which you can charge directly on the tablet via induction without an adapter. It’s also much more powerful thanks to the M1 chipset and works with the original Magic Keyboard.

The Samsung Galaxy Tab S8 is also interesting. If you include the stylus, it costs about the same as the iPad 10. The performance is a bit weaker, but the S8 has a fully laminated display that even supports 120Hz. You can use it with the S Pen, which never needs to be charged and is already included. In the meantime, an update to Android 13 has also been released for the S8.

Review: The Apple iPad 10 is faster than all Android tablets. Especially compared to its predecessor, it offers a better and more modern design, a bit lager and bright 10.9-inch display, as well as a new and good keyboard cover. Overall, it's a great tablet but it does have a bunch of downsides. The screen is not laminated and I noticed a jelly effect. You can get it with the first-generation Apple Pencil. However, for that one to work you have to buy an extra adapter which is ridiculous. And, sadly, the price has increased.
Positive
Negative